Portlanders are recycling zealots, and Oregon is so rich in forests that it's called 'the Saudi Arabia of biomass.'

So it surprised some when Blue Heron Paper Co. blamed the unaffordable price of recycled paper - its chief raw material - when it shuttered its Oregon City paper mill in late February.

Much of the recycled paper dutifully collected on the West Coast, it turns out, is being baled up, loaded into containers and shipped to China, which bid up the price higher than Blue Heron could afford.

A decade ago, the pulp and paper industry provided 6,300 family-wage jobs in the Portland area, according to the Oregon Employment Department. But that plummeted to 3,500 jobs by early 2011, before another 175 jobs vaporized at Blue Heron. Each of those manufacturing jobs supported additional positions for suppliers, truck drivers and other workers.

The Portland-based Association of Western Pulp and Paper Workers Union counted 24,000 members in Oregon and neighboring states in the early 1980s. 'Now we're down to just under 5,000,' says Greg Pallesen, the union's vice president, who worked at a Longview, Wash., paper mill before it shut down and the machine he operated was dismantled and shipped overseas. When paper mills close in rural areas, Pallesen says, 'there's no other work to pick up.'

Indeed, the entire American paper industry is 'teetering,' says Bruce Walker, the solid waste and recycling program manager for the Portland Bureau of Planning and Sustainability.

The U.S. ships more and more recycled paper to China, which uses it to manufacture finished paper goods that are exported abroad.

It's easy to blame China for the demise of the U.S. paper industry, but experts say it's more complicated than that. Before China's ascension, the West Coast shipped recycled paper to Japan, and later to Taiwan and South Korea, says John Lucini, Pacific Region vice president for SP Recycling in Clackamas.

The paper industry has gone global, spurred by enactment of world trade pacts. Foreign nations offer cheaper labor costs, looser environmental rules and faster-growing markets for newsprint and other paper products. Domestic companies were forced to compete with foreign operations, and they also gained ripe opportunities to take advantage of the lower costs and expand overseas.

Paper mills require an enormous investment in machinery, and many U.S. companies, such as Blue Heron, simply haven't invested much money into their domestic plants.

Only one new paper mill - a tissue plant in Alabama - has been built in the U.S. during the past six years, Powell says.

The world's largest paper company, Memphis-based International Paper Co., closed its Albany, Ore., mill about 15 months ago and shed 240 workers, even though it was still profitable, Pallesen says. The company has been heavily investing overseas, with major land and paper plant acquisitions in China, Russia and Indonesia.

Pallesen says the trade pacts have caused companies to scurry for cheaper labor costs. A Chinese mill worker gets about $1 an hour and no pension benefits, he says, while some of his skilled members get $28 an hour or more, plus health care and pension benefits. And China is worried about competition from cheaper labor in India, he says. 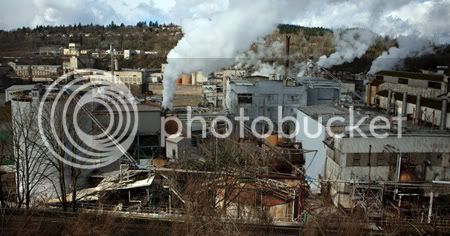 Haley found that China provided $33.1 billion in subsidies from 2002 to 2009 to propel its paper industry to become a major exporter. Not all the subsidies are easy to document, she says, so that figure understates the full amount.

The biggest production expenses at Chinese plants are due to the cost of paper-making equipment and pulp and recycled paper, not labor, Haley says. She estimates that labor accounts for only 4 percent of costs at older Chinese paper plants and 6 percent at modern plants, vs. an average of 8 percent at U.S. plants.

'I've come to the conclusion that capital, not labor, is the big advantage,' Haley says.

China tripled paper production in the past decade, she says, becoming the world's leading paper manufacturer. In contrast to the U.S., China's burgeoning middle class has a growing thirst for newspapers, magazines, books and other paper goods. Yet China has relatively few forests and a low recycling rate, so it's gobbling up recycled paper from other countries.

The U.S. exported 18 million tons of recycled paper in 2007, nearly three times what it exported a decade earlier. China is the dominant purchaser.

In January of this year, 165,460 tons of recycled paper were shipped from West Coast ports, nearly two-thirds of it to China, Powell says.

All those U.S.-bound shipping containers filled with Chinese-made goods must get back home somehow. So the price to ship goods back to China can be as little as 10 percent of the cost of shipping goods here, Powell says. It costs more to truck recycled paper across the Los Angeles Basin than to ship it from L.A. to Hong Kong, he says.

Portlanders who diligently toss their paper into recycling bins shouldn't get despondent, though. Walker says it still benefits the environment to have the Chinese use recycled paper from the U.S., as it saves energy and massive amounts of water. The carbon emissions from shipping are much lower than from manufacturing, he says.

Walker calculated in 2008-09 that 94 percent of the newsprint recycled in the city of Portland gets used in domestic mills, usually from Oregon or Washington. In Seattle, by contrast, much of the recycled paper is sent to facilities near the port, where it's easily shipped to Asia.

Portland has three paper mills within 70 miles that use locally collected paper, Murray says, before correcting himself to say two - now that Blue Heron has closed.

Now the lion's share of recycled newspaper collected in the Portland area goes to SP Newsprint in Newberg and Norpac Resources Inc. in Longview, Wash., he says.

Far West is locally owned, and its philosophy is to try to sell its recycled paper first to regional mills, Murray says. Long-standing business arrangements with the mills help assure a steady supply of paper to them, he says, and provide some assurances that locally collected paper will be used domestically.

But even the massive amount of paper recycled in the Portland area is not enough to feed area mills, which must collect paper from several surrounding states.

'Our volumes here aren't enough to sustain a significantly sized paper mill, let alone more than one,' Lucini says. His company's Clackamas recycling facility sends paper to the company's Newberg mill, but the mill also collects paper from elsewhere in Oregon, California and the mountain states, he says.

Can industry be saved?

Even if the region's paper mills can assure a supply of locally collected recycled paper, the price of the product is higher because foreign demand has boosted its value. And one of the two mills using Portland's recycled paper, SP Newsprint, is not on sure financial footing, Powell says. Its corporate parent, White Birch Paper Co., filed for bankruptcy reorganization in early 2010.

Powell says a minor surcharge on a typical residential garbage bill, amounting to perhaps $1 to $2 a year, could help preserve regional paper mills, if that were combined with government policy specifying a preference for locally derived recycled paper. The extra fee would enable the garbage haulers to make up losses from not selling their scrap paper to the highest foreign bidder, Powell says.

Walker, the city's expert on garbage franchises, is skeptical that could be done legally, or without disrupting the market in other ways.

Haley and Pallesen say the solution must come from federal trade policies.

Pallesen wants the Obama administration to slap countervailing tariffs on China, saying China's manipulation of its currency, combined with subsidies to industry, make a mockery of the notion of 'fair trade.'

Pallesen suspects multinational companies have the president's ear, and their priority is ending trade barriers so they can expand internationally. But he says protecting U.S. jobs should be seen as an act of patriotism.

This email address is being protected from spambots. You need JavaScript enabled to view it.

NUMBERS AND FACTS ON PAPER

• Americans send $3.1 billion worth of paper to landfills each year that could be recycled. (3)