The American Dream is alive, but out of reach for many This summer we completed a survey1 of more than 6,000 of our users, which yielded a number of interesting results.

Ambitions to Own a Home Remain High

Since peaking in late 2005 at 69%, homeownership in the United States as reported by the Census Bureau has been on a steady decline, recently falling to a historical low of 62.9% during the second quarter of 2016. While the homeownership rate averaged around 64% from 1965 to 1990, only a percent above the rates seen today, many have sought to explain the drivers of this downward trend.

Our survey results revealed that the overwhelming majority of renters intend to buy a home, with 89.8% indicating as such. This is a particularly interesting finding given the fact that only 71% of the respondents agreed with the statement that the “American Dream” involves homeownership. Intent to buy was highest among younger respondents, particularly millennials between the ages of 20-29, 94.4% of whom stated that they plan to buy a home, a number that falls to 70.2% among renters between the ages of 50 and 59. 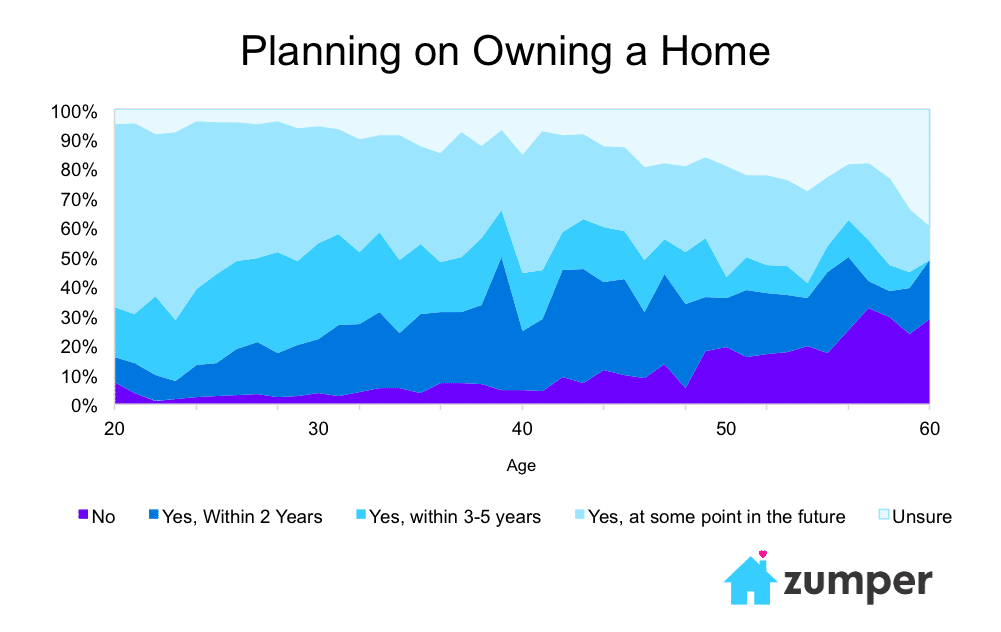 Among the surveyed renters, it appears that their self-stated financial position had a minimal effect on their intention to buy a home. Approximately 90% of individuals who assessed their own financial status as ‘Fair’, ‘Good’ or ‘Excellent’ plan on purchasing a home.

One particular result that stood out was that renters with student loans actually had a greater intention of eventually buying a home, 92.5% versus 87.4% of those who did not have loans. While, as mentioned, ability and ambition to buy are different things, student debt does not seem to be discouraging renters’ eventual goals.

Some Baby Boomers Now Opting to Rent rather than Own

In addition, baby boomers are opting to rent instead of own. Overall, 16.9% of respondents who currently rent indicated that they owned at some point in the past, with a median age of 47 among these individuals. While many of these individuals were either divorced, separated or widowed, 24.5% of them were single and another 27.2% were married individuals who once owned but had since decided to rent. The median income among this group was between $50,000 and $75,000.

People Want to Buy, but Can They Afford to?

While the overwhelming majority across several cities indicated their intention to buy a home, we found that – based on our respondent’s self-reported incomes and the method used by Bloomberg to calculate the minimum salary required for a mortgage – many are not yet able to afford a down payment in the city they currently live in. Many of these cities were on the West Coast, notably San Diego and Los Angeles, where the gaps between people who wanted to buy a home and those who were able to were 71.49% and 66.96% respectively. While it is undoubtedly true that many individuals tend to move out of the city before purchasing a place to live, these results demonstrate how difficult owning a home in a city can be in 2016.

Austin had the smallest gap between the desire to own a home and the ability to afford a mortgage, likely helped by a strong local economy and real estate prices that have risen more slowly than some other major cities. Another important fact to note is that our sample skews younger than the general population, so the ability to afford a mortgage should rise if these individuals are able to sustain solid wage growth. 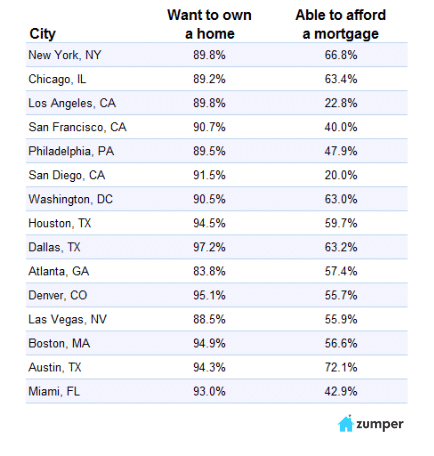 Doubling Up: Millennials Opting for Roommates

Americans are also getting married later, and one Harvard study has estimated that changes in marital status have accounted for an almost two percent drop in homeownership rates. Furthermore, as rents in cities rise, many have chosen to live with roommates longer.

While our survey respondents undoubtedly skew younger and more concentrated in cities than the ACS, a whopping 62.2% of millennial renters between the ages of 20-29 stated that they had roommates. While these numbers may be partially impacted by the 20-23 population, who are often still in college and living with roommates, the figure was nearly 55% for those between the ages of 24 and 32. 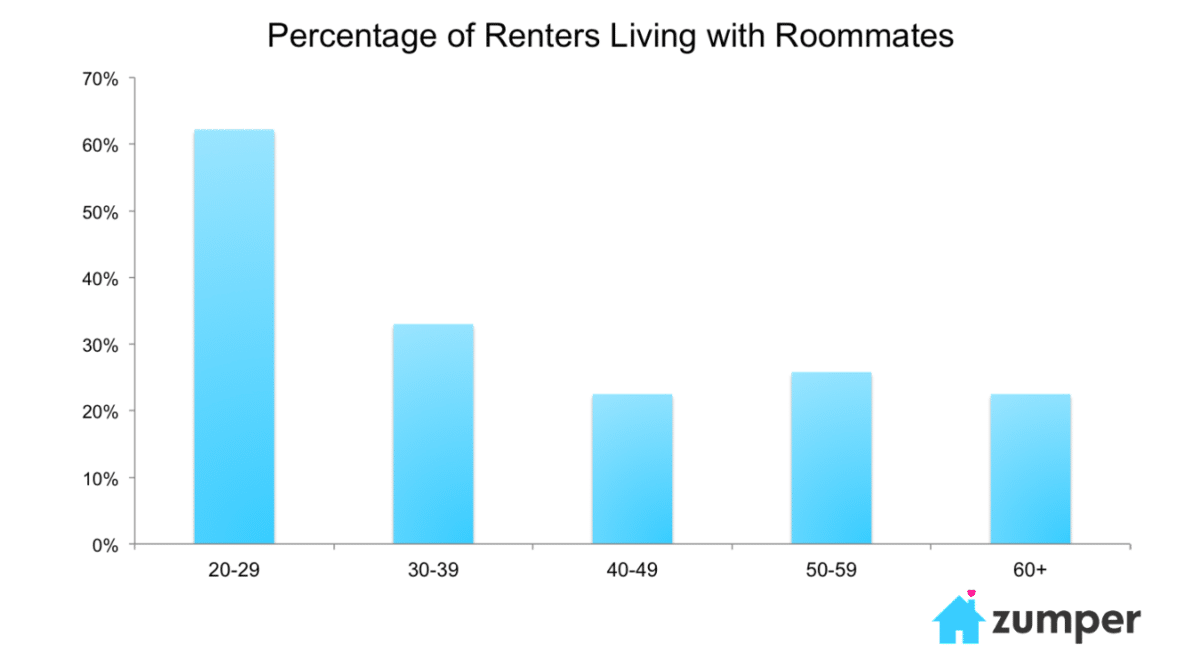 Income seemed to also factor into individuals’ decisions about whether or not to have roommates, as the proportion of renters living with roommates declines steadily as income levels increase. An interesting result was that more than half the individuals between the ages of 24-32 with self-reported incomes above $75,000 live with roommates, suggesting that higher income millennials may be choosing to live with roommates even if they could potentially afford to do otherwise. 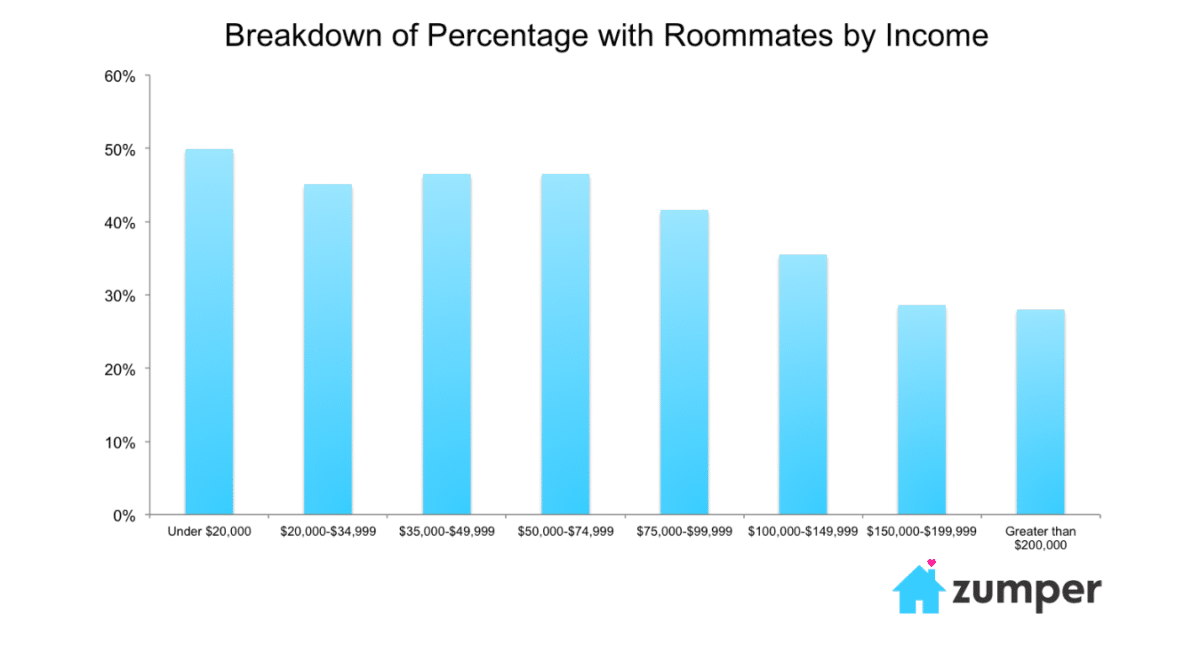 The Rise of City Living

Demographic changes have contributed heavily to the downturn in homeownership. The percentage of Americans living in cities has steadily been climbing over the past few decades, where homeownership rates are typically lower. Our survey results also suggest that age is a large determinant on the factors that impact where renters moved. 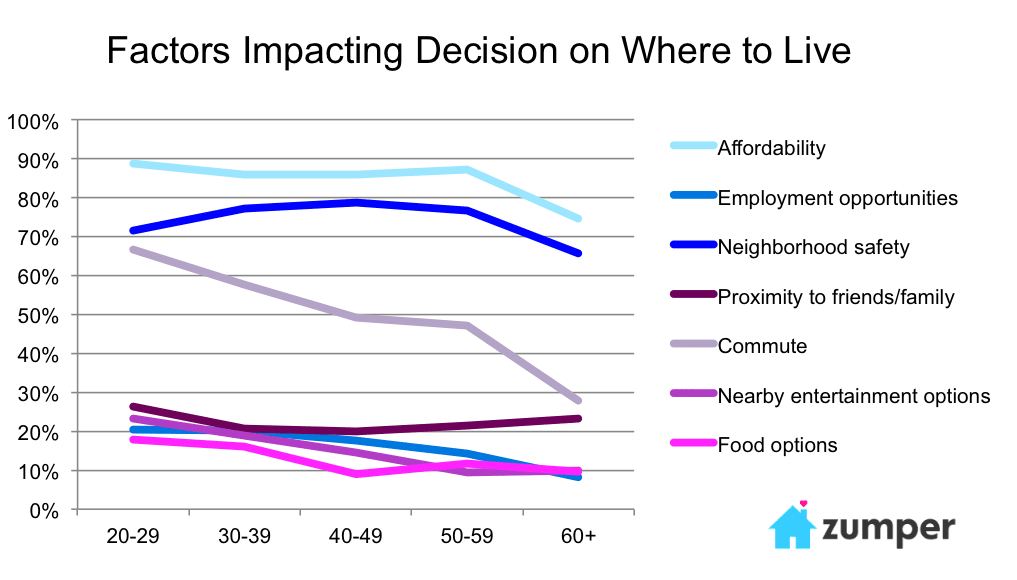 Older respondents cited proximity to friends and family and neighborhood safety, often higher in the suburbs, more frequently as factors in their decision on where to live, while younger respondents care more about commute and nearby entertainment options, drawing them to cities.

These are the first results from our inaugural Zumper Renter Survey. More than 6,000 renters took the survey, with respondents coming from across the United States. The survey was designed to not only help us but the media, researchers and the public gain a stronger understanding of the behavior of home owners and renters. The survey was distributed to our users via email and responses were gathered online. The survey collected answers to twenty-six unique questions, which ranged from questions about the rental market to the election, and also covered demographic information. There are a number of other surveys designed to gather similar data, most notably the American Housing Survey, which is gathered by the Census Bureau. We acknowledge that our data and findings may be impacted by various biases due to the differences between our user base, usually younger with a higher concentration in cities, and other similar surveys and the income related biases involved by offering the opportunity to win the survey’s prize, equal to $1000.

Zumper is a small and wildly ambitious startup tackling a problem that affects over 100 million renters across the US and Canada. We believe that renters shouldn’t engage with technology only to search for their next home or apartment rental.

I found this helpful

I did not find this helpful